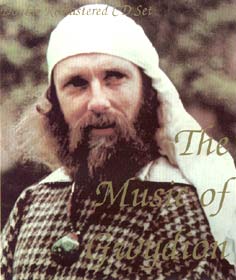 The following is taken almost verbatim from the cover of the CD The Music of Gwydion, which was based on a biography of Gwydion by long-time friend Anna Korn.

Born in a family of long-term California residents, Gwydion met the blind seer and poet Victor Anderson, teacher of the Faerie Tradition at the age of thirteen. Until his early twenties, Gwydion studied with Victor.

In college. Gwydion majored in Theater. He was a consummate actor, and was fascinated with the mysteries of masks and personae, which fitted his Gemini nature. The works of Shakespeare and Greek playwrights impressed him most strongly, but he expressed impatience and even disgust with modem theater. For him, theater was truest when it was closest to its spiritual roots as religious dromenon [i.e., performance, labyrinthian? . . . hard to find definition].

Gwydion had a great store of poetic and anthropological lore, but was clearly more under the spell of the strength of a tale than of scientific method! He had an excellent ear for the cadences and rhythms of words, which made listening to him an enchanting event. Later, when he moved to the land to homestead, he was in great demand as a reader on long winter nights or to pass the time during periods of stormy weather.

A genial and generous host, he was also quite the trickster, often going to extreme lengths in hatching plots for practical jokes. His tongue was witty and could be dangerously barbed, in true Bardic fashion. Gwydion’s derision could be crushing.

He would retire early and spend much of each night in trance, asking not to be wakened or disturbed. He was deeply interested in linguistics, and spoke and wrote in Welsh. He was active in the Society for Creative Anachronism (SCA) in its early years. He was the Court Bard in the SCA’s Kingdom of the West for many years; a glib, courtly and foppish figure.

By the early ’70s, Neo-Paganism was beginning a major growth spurt. One of the landmarks of artistic merit in this rebirth was Gwydion’s first recording, Songs of the Old Religion. This album has songs for each Sabbat as well as songs of the seasonal round and love songs to the Goddess and God, and brought Gwydion a considerable measure of fame and standing in the Pagan community.

In 1976, he traveled to the British Isles. The trip had a profound influence upon him. He not only met his Welsh correspondent. Deri ap Arthur, but also many other active figures in the Wiccan movement, among them Alex Saunders and Stuart Farrar. He made a pilgrimage to the Eistedffodd in Wales. and was among those called to the stage on the last day of the ceremonies, when foreigners of Welsh descent are honored, an event which proved profoundly moving to him. He felt he had regained his path. and it was not the path of hubris and fame. ln visiting Ireland, he had a terrifying vision of the Morrigan upon Tara Hill, which called again to mind his identification with the archetype of the Sacred King.

Seeking peace, he quit his job upon returning to the U.S. and began homesteading on Greenfield Ranch in Mendocino County, naming his parcel “Annwfn,” the Welsh Underworld.

Gwydion’s writing, never prolific, suffered under the hardships of a demanding life, but he was able to adopt a humorous and philosophic view. During this time he published the book of his music and poems, Wheel of the Year, with production help from Isaac Bonewits, Craig Millen and Andraste.

In 1980.after many years of seclusion in the wilderness, Gwydion appeared in concert and ritual at Circle’s Pagan Spirit Gathering in Wisconsin, an event of particular power. From this point on, he became more active publicly, sponsoring and organizing Pagan gatherings such as the 1981 Summer Solstice Celebration in the Oakland Hills, and continuing New Year’s Tree Plantings. In late ’81 and early ’82 he recorded his second album, The Faerie Shaman.

In the season of Samhain, 1982, Gwydion was killed in an auto accident in which he was thrown from his car as it overturned. He seemed to know the time of his death was near. He had spent the previous few days visiting family and friends all over the Bay Area. “Filled with joy, we weep for the love known and missed.”

Gywdion (From the CD liner notes)
By Anna Korn (excerpted) 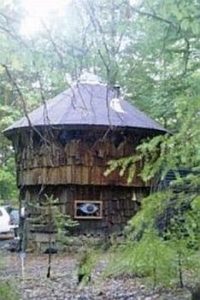 In 1977 Gwydion Pendderwen purchased the last plot available (55 acres) on Greenfield Ranch, a large ranch that was subdivided into a large number of parcels in the ’50s. When Gwydion moved there, the land was rather barren and chopped up due to extensive logging a few years earlier. Improving the condition of the land had to wait while he built a home. 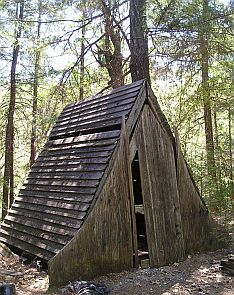 During the first year, while building his dwelling, he and his cat occasionally took shelter in rather simple digs–this tiny A-frame, which became his wood shed. It finally collapsed from old age around 2008.

Being part-way up into the Coastal Range mountains, Annwfn can get quite cold during the winter, and the difficulties of getting building materials and equipment up the often muddy or washed out roads must have been considerable.

This first home became known as the “Shaggy Mushroom” due to its former thatch-like roof of hand-split wood shingles. The roof was replaced by more fire-resistant roofing some years ago. That name remains, although now it is usually called The Temple.

Note: One of the important projects needing attention on the land is work on the foundation of this historic sanctuary. If you have skills and/or equipment of this type, please let the Stewards know.

Inside the Temple one finds a variety of altars, art works and mementoes from many different sources over the years. It is a lovely place to have a retreat and meditate, or browse the extensive collection of Gwydion’s original manuscripts and other books.

The architecture is creative and ingenious. There are little touches of love and devotion to the natural world throughout, e.g. a railing made from an elk antler, with a spider web of cord instead of balustrades, for example. On a cold day there is an efficient wood stove to warm your buns or hands.